And finally wrapping up this month of animated movies that’s seeped slightly from July into August I’ve reached another milestone. This is the last animated film that I currently have on my list. That doesn’t mean there aren’t any others out there, I know there’s plenty if I expand to foreign comics, but I’m pretty sure I’ve gotten every English one. As for the actual movie, Turtles Forever came out of an event that was done for the 25th anniversary of the Turtles and so they made this TV movie based around the current series that started in ’03 and was airing on CW4Kids. The main focus of the movie was to bring the 80’s animated series into a connected continuity with the 00’s series, and apparently to also make fun of it. There’s a ton of meta humor that often gets in the way of telling any sort of real story, but that’s ok because it is a ton of fun to watch. Especially if you’re someone who grew up with the 80’s Turtles and even if you’re like me and have never seen a single episode of the 00’s Turtles. 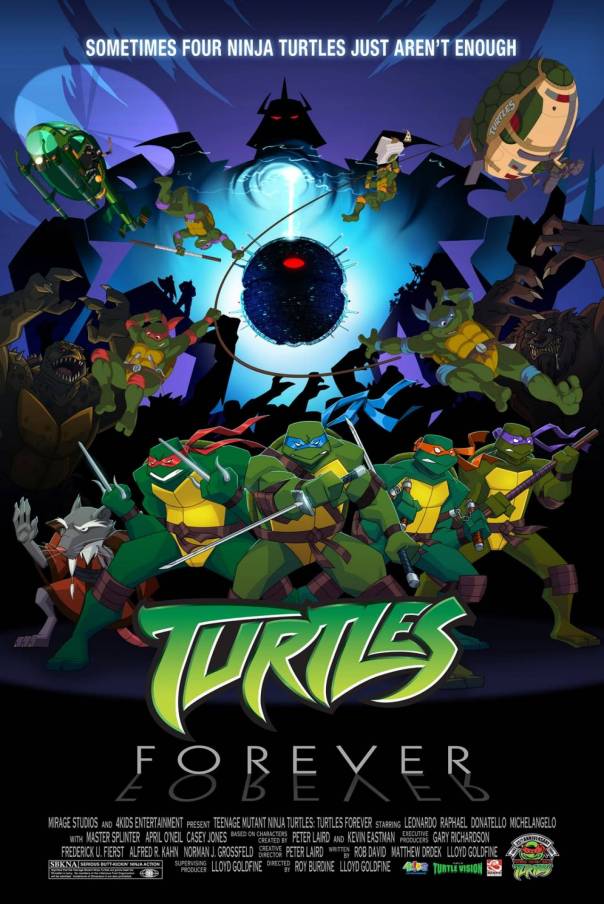 The film doesn’t waste very much time to introduce the 80’s Turtles into the then-current show’s universe. And when they show up, they’re generally treated as constantly joke-spouting morons. And yet somehow, there’s still a level of respect given to them so it doesn’t entirely feel like the movie itself is making fun of the 80’s show in a harmful way, but more of a loving way. It helps quite a bit that the designs of the 80’s Turtles as well as all the villains that make an appearance are completely spot on. The same can’t be said of the voice acting which ranges from passable imitation when it comes to Bebop and Raphael and goes down to way off the mark like with Leonardo. Unfortunately this was due to the costs involved as the 00’s Turtles was a New York, non-union production and the 80’s Turtles was an LA, union production and never the twain shall meet. 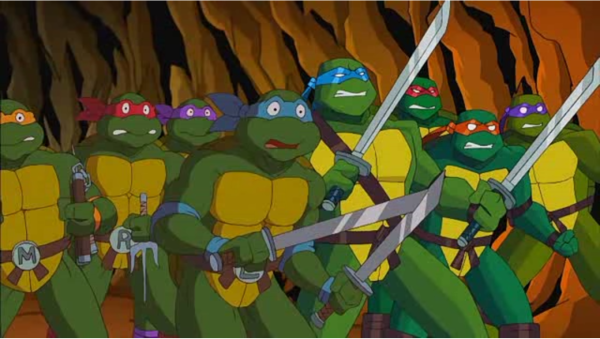 The actual plot is a more or less typical dimension hopping story, something similar was actually done in Justice League: Crisis on Two Earths. Only instead of using DC’s idea of a multiverse, the Turtles version of a multiverse already had several different incarnations, including some slight visual references to the live action and even the CGI animated TMNT. But for the most part, this just focuses on the darker-but-still-kid-friendly 00’s Turtles and the cartoonish-and-way-too-kid-friendly 80’s Turtles with a climax that involves both universes showing up in an animated world based on the original, black and white comic version of the Turtles complete with narration and lines pulled from the original issue. 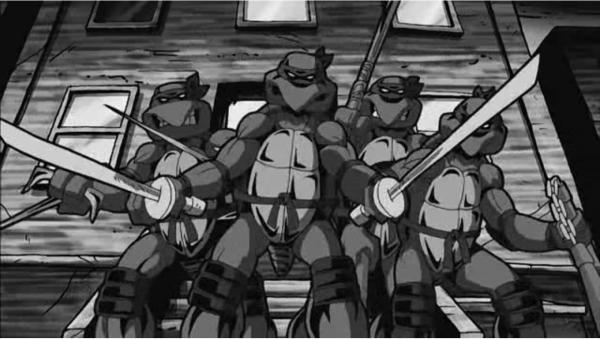 The “Turtles Prime” animated in the style of their 1st issue.

What really helps sell this is the fish out of water comedy that the 80’s Turtles bring to the 00’s universe. Back then, they had no problem walking out in the open to get a slice of pizza, though there were likely many less noogies. The infighting wasn’t limited to the two groups of Turtles either, 80’s Shredder and Krang also came along for the ride complete with Bebop and Rocksteady, and compared to the villains that the 00’s Turtles face, they are shown as being completely incompetent buffoons. 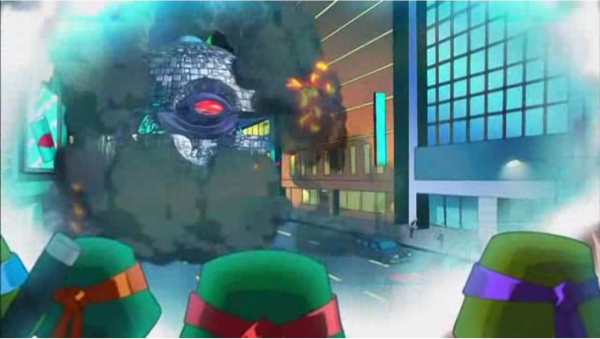 One of the few problems with this film is that there is going to be some expectation of background with at least some of these characters. There’s enough to go on to get the gist of the story, but there are some characters who aren’t entirely clear how they fit into this world. Somehow the Shredder of this universe is something that looks like a cross between Krang and Shredder, as he is a weird purple alien slug with tentacles who lives inside a Shredder-like suit. And yet there’s also the Kurai as his daughter and Hun who seems to be the current leader of the Foot, or the Purple Dragons, or whatever they were called. Even though I hadn’t seen an episode of the series this movie was based on, I did generally get the gist of how everything fit together. The one downside of having so many characters was that it felt like 00’s Leonardo and Donatello got the short shrift. Of the 80’s characters, they all more or less felt like one character aside from Donatello as the tech guy. And obviously the comics TMNT felt much like a group rather than individual characters, but they didn’t have very much overall screen time nor do they have much to distinguish themselves aside from their weapons. While this film didn’t really make me want to explore the world of the 00’s Turtles, it was a fun look back at the 80’s Turtles from a now-slightly-nostalgic 00’s perspective. Until next time, this has been Bubbawheat for Flights, Tights, and Movie Nights.