I’m continuing on my quest to finish off the last few popular superhero and comic book movies that I haven’t gotten around to yet, going by a reasonable metric of 50,000 IMDB user ratings I should have them covered by the end of this month at the rate I’m going. And somewhat surprisingly two of these films have Chris Evans in them. Push was one of those films that went past me in theaters. Honestly, there was a big gap in my theater movie watching from 2007 to about 2010 as when my daughter was born at the end of 2006, we stopped going to the theater until she was about 4 or 5. Judging by the trailers, it looked like a generic action movie about pared down X-Men and as little as I had paid attention to it, I always assumed it was Selma Blair in the Camilla Belle role. But when I actually sat down and watched it, it was like a pared down version of X-Men that focused on the characters and had a fascinating plot device that it was built around. By the time it was over, I really enjoyed this film and I’m disappointed that it seems to have faded into relative obscurity with only a small cult of fans who really enjoy it. 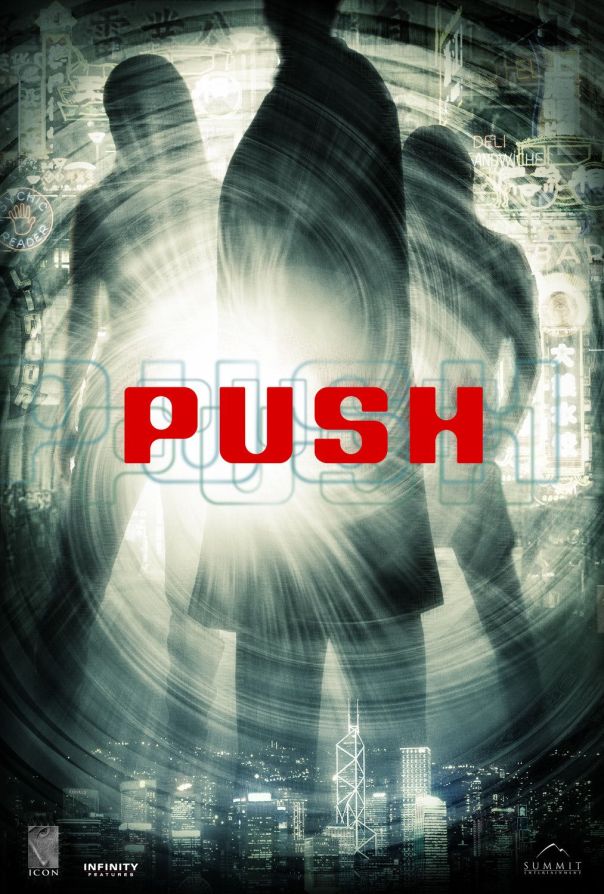 One thing that both helps and hinders this film is their concept of mutants, or psychics, or people with powers, whatever you might want to call them. It’s actually a smart move to move away from the Heroes or X-Men concept where someone would grow into a completely random power that could do almost anything, and everyone could do something different. In this world, there are only about a half dozen or so different powers, and they all have stupid nicknames. Some of them make more sense than others, but many seem to have been created so that they are able to further the plot of this specific movie. It was also just slightly confusing because the name of the movie is Push, the main character seems to be Chris Evans’ Nick who has telekinesis, so you might think that it refers to the fact that he can push things around with his mind. But instead, tk’ers are referred to as Movers. There’s also Watchers, guess what they do. Though it is interesting that they make it clear that seeing the future is based around decisions rather than an overlying fate. Some of the abilities that make less sense are the sniffers who can track someone based on literally sniffing something they’ve used, or the shadows who can hide the presence of a person or object from other psychics. It’s also clear early on that these abilities are passed down to their children, though it’s never entirely clear if the abilities grow, shrink, or stay about the same when being passed down.

What really helps sell this movie more than anything else is the style. It’s extremely colorful, from Cassie’s hair to the entire Hong Kong setting. Everything looks gorgeous and vibrant. It also helps that the effects used for the psychic abilities are very minimal, typically just flashes of images for the telepresent abilities, and subtle effects for the telekinetic abilities. The prismatic ripples for the Movers look especially good, and it wouldn’t be surprising if most of the Shifter’s switching ability was done through sleight of hand rather than any special effects at all. The effect of changing the iris and pupil of the eyes of the screaming guys and the Pushers were also quite effective.

Another fascinating aspect of this film is the complicated plotting that goes on throughout the film predicated by the fact that people who can see the future exist. And because people can see the future, there are also ways to get around that future sight, and that’s where everything starts to come together in the end. It’s possibly not a perfect set up in a way that a movie like Primer can be overanalyzed, but there are plenty of moments even going back to the beginning of the film that show how much of what happens during the course of this movie was already foretold in one way or another. Especially when it gets to the point where Evans is writing down notes for everyone to open as specific points in time, in a way it becomes like a heist movie where all the pieces have to fall into place at the exact right times and places, and when it does it is extremely satisfying.

The film isn’t without its flaws however. There is a lot left unexplained, like what exactly the evil agency “Division” actually does. There is obviously an aspect of control and policing, but it doesn’t quite feel like the Mutant Registration Act sort of thing, or quite the Men in Black either. It also seems odd that they have been experimenting with a drug that is supposed to boost psychic abilities, but it’s killed everyone they’ve tested it on. If that’s true, then why do they think it even works if they don’t have any potential results? Are there psychic mice that they can test on? It also doesn’t explore what seems like it could have been the central concept of the film: Pushing. There is only one moment in the movie where the characters have doubts over whether or not their memory of something is real, or if it was something that was pushed on them. This could have easily been expanded upon with fascinating results, but it’s generally only used to either kill people or in one case as a joke.

But what this film really gets right are the characters. Pretty much every main character is more than just a one-note hero or villain. They all have backstories, motivations, and mini character arcs that make the entire world feel more real. Even something that could have just been a one-note villain like the Triad screamers and the lollipop watcher have a little extra dimension to them as we see them essentially competing for the approval of their father. All in all, it was really a great movie and such a shame that it was both a critical and commercial disappointment as it could have gone on to be something greater along the lines of Heroes. At least I was able to watch it and enjoy it, and hopefully a few more people will as well. Until next time, this has been Bubbawheat for Flights, Tights, and Movie Nights.