← Darkman 2: The Return of Durant
Red Sonja: Queen of Plagues →

After watching the second Darkman movie, I didn’t exactly have high hopes for the third entry in the franchise and while most of it faced the same mediocrity as the second movie, it went a few places in the second half that I didn’t quite expect and surprisingly enjoyed. What helped the most was that this film didn’t try and just re-do what the first film did with a slightly different premise, but it actually took the character in a new-but-believable direction. There are still plenty of mistakes along the way, but it was a worthy attempt. 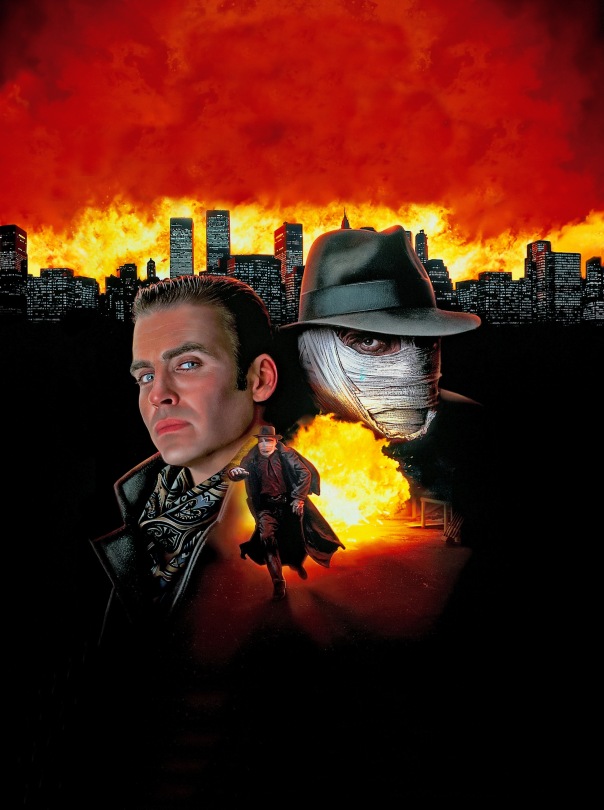 This time around there is no more Durant and Arnold Vosloo is once again playing Peyton Westlake in his lab in an abandoned subway tunnel. Instead of bringing back Durant once again, they introduce another fairly generic mob boss named Rooker. This one is much more slick and businesslike and even has a wife and daughter even though he doesn’t much care for either of them anymore. There is a tie to the first movie, this time around they bring back one of the doctors who basically experimented on Westlake to cut off his pain receptors and give him both bipolar disorder and superhuman strength during his manic episodes. The twist is that she’s working with the mob boss and he wants to use her research to give his minions superhuman strength. And of course, because the doctor is a woman, and the mob boss is a sleazebag, she’s also having an affair with him because of course she is.

Where this film struggles the most is the long set up process. We get a little bit with Westlake stealing some money and killing a mob minion in the same way that he killed Ted Raimi in the first movie. There’s a little bit where the doctor claims that she’ll be able to restore Westlake’s pain receptors if he comes to work with her in her lab. But meanwhile he is also able to finally perfect his liquid skin, just enough to make a single mask. And the twist is revealed when the doctor shows that she wasn’t healing him, she was studying him and implanting basically a shock collar to try and control him. As if the laser rifles in the second movie weren’t weird enough. Westlake already sets up that he was paranoid, so his research is only on a single floppy disk which is stolen along with the perfected liquid skin sample.

Where the film really starts to take a turn is when Westlake removes the weird implant and start to go after the mob boss. There’s a great moment when Westlake, disguised as the mob boss, goes to his home to try and find the disk and skin but is interrupted by Rooker’s daughter who was set up earlier in the film. She leads him to his surprise birthday party, so we get a whole scene of Westlake as Rooker trying to navigate this odd social situation. There’s even a completely awkward sitcom-esque set up to worry the audience about him revealing his identity when he’s asked to play the piano; something that Rooker obviously does well and Westlake likely does not. He gets out of it by bonding with Rooker’s daughter and playing a simple song together.

Another weird direction is when Westlake continues to bond with the wife and daughter. After spying on them to try and get into the mind of Rooker, and spending time with them in the guise of Rooker, he goes one step further and attends the school play as Rooker as he correctly assumed that the mob boss would be too busy to spend time with his family. You get the sense that Westlake begins to have legitimate feelings for these people which would make a little bit more sense if he had his own child in the first movie, but then again, who can resist feeling sorry for a little girl who misses her father?

While the whole Westlake playing house is something interesting and different for a film like this, it ultimately reverts back to home video sequel-esque storytelling when the doctor is able to turn Westlake’s super strength into something she can inject with a syringe. Cue some idiot minions, an action scene with a little more impersonations, and we end up with Rooker taking his own family hostage and injecting himself with the strength serum to confront Westlake. And since this is the type of film that isn’t allowed to end on an entirely happy note, Rooker destroys the floppy disk containing Westlake’s research and while the vial of skin was saved, the daughter ends up getting her face burned and as soon as it happens, it’s obvious where that vial of skin is going to be used. Not only that, but as soon as Rooker takes the strength serum, his character changes from a cool and collected illegitimate businessman to a stark raving, over the top comic book style villain. It felt jarring when compared to the rest of this movie and completely out of place.

While the good bits of this film did bring it a step above the second film in this franchise, there’s still a lot left to be desired. From the predictable moments once they brought in this wife and daughter of the villain to the tonal shift at the end for the climactic fight scene before Darkman’s sacrifice and acceptance by the wife which also made this feel more like the ending of an television episode where things look promising for the hero until it all goes back to the status quo to reset things for the next episode. There were a few good moments here and there, but overall it was ok, but still a letdown. Until next time, this has been Bubbawheat for Flights, Tights, and Movie Nights.

← Darkman 2: The Return of Durant
Red Sonja: Queen of Plagues →