It’s time for another superhero podcast review as I keep searching for other random superhero-related podcasts. In general, I’ve been pretty lucky going through these as I’ve enjoyed more than I’ve not enjoyed. For each of these podcast reviews I go through the statistics and come up with a final rating of: Subscribed, Unsubscribed, or Selected Episodes. If you host or know of a superhero related podcast that I haven’t reviewed yet, feel free to leave a comment or send me an e-mail at Bubbawheat@msn.com 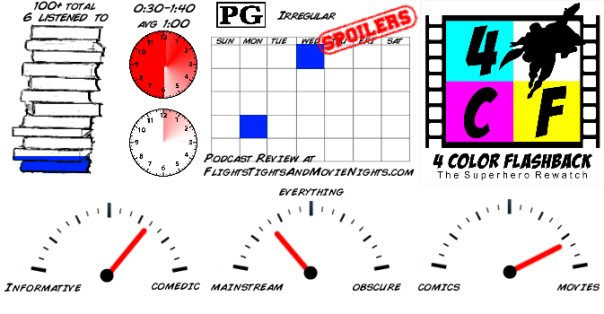 Website: http://fourcolorflashback.libsyn.com
Episode count (as of 1-26-19): 142
Episodes listened to: 6
Episodes recommended to me: Swamp Thing: The Pre-Watch, Batman: The Post-Watch, End of Season 1 Spectacular, Mystery Men: The Post Watch
Release schedule: irregularly
Episode Length: 0:30-1:40 averaging around 1:00
Audio Quality: Mostly clear, one host is slightly muffled/tinny
Language rating: PG
Spoilers: Yes
Production format: A single conversation between cohosts as they discuss the main subject of the episode which is typically one of two different show formats. A pre-watch where they discuss what they are planning on watching, either for a single movie or a portion of a season, or a post-watch where they discuss the movie after watching/re-watching it.

The hosts are Cainim, Karen, and John who have varying histories with superhero movies and they limit them to the past 40 years which basically starts with Superman: The Movie. The interesting variation with this show is that they tend to break each movie down into a pre-watch and a post-watch. In the pre-watch episodes, they discuss what they know of the movie, whether it’s their memory of having seen it before, or just their general impressions of the trailer and what they have heard about it. Sometimes the pre-watch is for a single movie, but later episodes seem like they group their pre-watches together for the next few movies. They also predict what they will rate the movie(s) they are about to watch. The post-watch episodes go through the entire movie including spoilers as they discuss what they thought about it. The discussions are relatively surface level but insightful and engaging.

In the episodes that I listened to, I didn’t get a very strong impression of comics knowledge so the focus is mostly on the movies (or TV shows) rather than the comics. Though all of the episodes as far as I can tell are comic book movies without any non-comics superhero movies like Incredibles or Unbreakable and do include the occasional non-superhero comic book movie/show like Tank Girl or iZombie though they do seem to stick to the action/adventure comic book movie without going to any of the genre outliers like Persepolis or My Friend Dahmer.

I did quite enjoy all of the episodes that I listened to.  The hosts all work well together and have a good knowledge of superhero movies without it being all-extensive. The selection of movies is also pretty nice where they do include some of the worse superhero movies like Howard the Duck and Spawn. They give everything a fair shake and I quite liked their episode on Man of Steel which tends to be a divisive movie and they handled their issues and what they liked very well and it was also very different among the three hosts. My only issue which isn’t a major one is that the sound quality with Cainim was slightly off compared to the other two. Not irritatingly so, but noticeable.