I’ve been very curious about this title ever since the first trailers started being released. This is the first DC anime title since the anthology Batman: Gotham Knight that was released in the early days of the DC animated movies back in 2008. I’ve only heard a few things about the movie since, though what I had heard was mostly positive there were some warnings about how weird it was. Even with the warnings, I don’t think I was fully prepared for how far out there this movie goes. Aside from the out-there-ness of it, there are some great moments throughout and I quite enjoyed the majority of this film. If you haven’t seen it, I will be discussing how far out there this movie goes. So if you’d like to be surprised then here’s your spoiler warning.

Batman Ninja begins with Gorilla Grodd’s experiment which causes several of Batman’s Rogue’s gallery as well as his current cadre of Robins to be blasted across time and space to feudal Japan. But because time travel tends to be wonky, Batman ends up in the past about two years after everyone else. This is mainly a plot convenience, but it works well so that he arrives in an already time-altered ancient Japan where the villains have already built up their own mini warring empires and Batman gets stuck in Lord Joker’s territory with Catwoman for a little initial backup.

What this movie does well are the several twists and turns with alliances being shifted and several double crosses, but they are generally all easy to follow without feeling overly convoluted. Grodd and Catwoman especially change sides more than once over the course of the movie but they make sense each time it happens. There are also surprise appearances by allies like the various Robins of which four show up here, as well as a clan of Batman-worshiping ninjas. There’s even a moment where the Joker and Harley Quinn seem to have cleaned up their act. 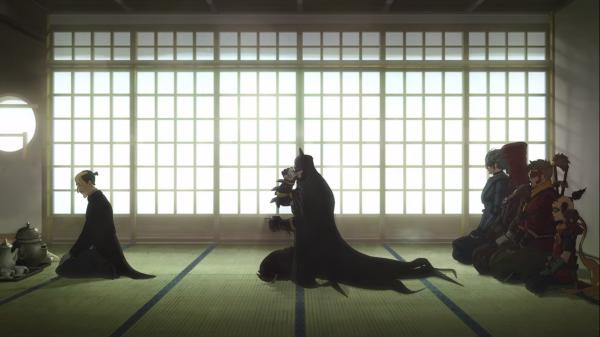 But what can be difficult to fully unpack are the several places where this film really goes off the rails. When it gets to the big action climax, the various Gotham villain Daimyos turn their castles into a giant robotic mech. Those mechs then become controlled by Grodd to become a giant sized Voltron-esque mega-mech. And in order to fight the giant castle-mech, Grodd eventually changes sides and gives control of his army of monkeys in samurai armor to Robin where they coalesce into a giant monkey. But that’s not where it ends. After that, the Bat Ninja Clan comes in and a giant swarm of bats covers the swarm of monkeys and create a massive Batman to rival the castle mech. If you can get past that weirdness, then the rest of this film is gravy.

What does help this film is the overall look and style of it, and its something that changes over the course of the film. The look of the characters have that anime feel to them, but there’s also a sense of a more recent cell-shading technique that gives them a more 3D feel than traditional hand-drawn anime. But there are also different techniques throughout the film, like how the sky has a rainbow pattern that’s reminiscent of classic Japanese art. There’s also the scene where Joker and Harley have temporarily lost their memories and are living as simple farmers which is done in a completely different animation style that’s more simple and slightly abstract that helps give that scene a jarring feeling to it as Red Hood doesn’t believe that they are actually reformed while Batman does believe them.

The best part of this film really is the back and forth between Batman and the Joker. He has plenty of tricks up his sleeve and even when Batman has an initial advantage when he gets his Batmobile slash Batwing slash Batcycle, the Joker seems to be one step ahead of him. It’s also nice that for the most part, Joker isn’t necessarily a match for Batman in a one-on-one battle, but instead Joker relies more on crazed and unexpected tactics to get the jump on Batsy. Even so, the final battle between the two of them on top of the roof is quite glorious to behold even if it ends with another WTF moment right alongside a giant Batman made up of thousands of monkeys and bats.

The voicework is also quite good as is usual for the DC Animated movies. And for the record, I did listen to the American dub rather than the original Japanese audio. Tony Hale does a decent job at the Joker and Roger Craig Smith has the right kind of gravel in his voice for Batman while Bruce Wayne doesn’t really make an appearance here. Grey Griffin also does a good job as Catwoman especially as an opportunist, siding with whoever will benefit her the most in the moment. Overall, the movie was quite enjoyable. The surprises tended to be a bit on the WTF side of things, but they still worked more often than they didn’t and it added a nice bit of welcome comic relief. The action scenes look great and the style of all of the characters translate into anime very nicely. Until next time, this has been Bubbawheat for Flights, Tights, and Movie Nights.