Justice League vs the Fatal Five

Justice League vs the Fatal Five

I’m a couple weeks into my 5-week trial of DC Universe and it’s a nice benefit that at least some of their home video releases are also being released on their streaming app the same day as their physical release date. I was a big fan of the Batman animated series as well as Superman the animated series but I fell out of cartoons before I was able to follow them to Justice League and Justice League Unlimited. And it was nice as it always is despite repeated assurances that he will retire the voice to see Kevin Conroy back as the voice of Batman along with the Justice League animated series voices for Superman and Wonder Woman. I had a few doubts considering that the last time they redid this style of animation was the disappointing Batman and Harley Quinn, but I’m pleased to say that they got things right this time around. There was still just a slight disconnect because they moved away from the kids series tone and brought it into a much harder PG-13 in terms of the violence and language, but it also just felt like a slightly more grown up version of the animated series, serieses, series’s, the multiple series. And as with every film I review, I will be discussing it in full so here is your spoiler warning. 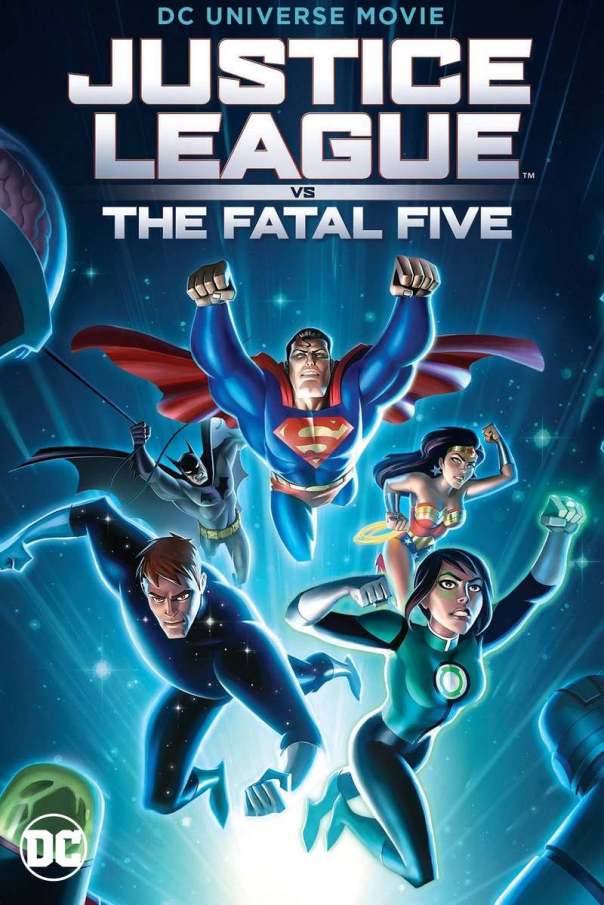 One thing that’s been a slight disappointment in some of the DC animated movies is that the main line animated movies for older kids and adults focus on the main characters of Batman and the Justice League while it’s the younger-geared movies like DC Superhero Girls and the home video LEGO series that branches out to more of the lesser known characters. This calls back to the classic Justice League Unlimited series but also brings in one of the newest Green Lanterns and currently the only female one with Jessica Cruz. They also introduce Ms Martian who seems to be basically a younger and female version of Martian Manhunter and in this movie is a Justice League recruit under the wing of Batman. There’s also the lesser known Mr. Terrific who was in the JLU series though he was voiced by Kevin Michael Richardson who didn’t voice him in the original series. The movie also brings in several characters from the Legion of Superheroes from the future, though it’s mainly Starboy as the only hero that makes it to the past along with the villains, three of the titular Fatal Five.

The villains honestly didn’t have much personality, but they really didn’t have to based on the story as a whole. There’s the guy with the glowing skull who can disintegrate stuff, the cyborg with a gun for an arm, the guy with a really really really sharp axe, and later on a pink guy with a visible brain who shoots energy beams and the really powerful empress who has a floating eye orb who follows her around and does Green Lantern type stuff. They do all have names, but they’re generally forgettable and don’t really matter. There are a few fun moments like when they are basically having a hostage negotiation with Jessica Cruz and one of them does a finger gun motion complete with the mouth noise which is timed with the triggering of an explosion in Metropolis.

The rest of the returning heroes played their parts nicely. Surprisingly Batman had the most personality and got the funniest lines with his mentorship with Ms Martian. Superman honestly didn’t get a whole lot to do aside from bleed early on and fail to save the sun at the end. Wonder Woman also fared somewhat poorly as a side character in her own story so to speak. She really only got one fight scene to show off and barely any memorable lines. This really was a showcase for Jessica Cruz and Starboy as they were front and center for most of the movie.

One interesting aspect of the film is how they brought in a touch of mental illness into the forefront of the characters. Starboy basically had a nonspecific mental disorder that made him Hollywood style crazy. As in, he would have fit in any movie or TV show set in an insane asylum as he isn’t able to fully form coherent sentences and talks in a very manic way. But even though he’s somewhat crazy, he’s still a superhero and lucid enough to eventually get his point across. Jessica Cruz has a much more grounded mental illness that appears to be a form of anxiety and/or depression and/or phobia. She is seeing a therapist and has a mantra that she repeats to herself in order to help center her mind to do whatever task is at hand, whether it’s something mundane, or something Green Lantern related. And while there’s a connection to be made when she finally recited the Green Lantern oath, it would have been nice if the connection to the oath and her personal mantra was made a little bit more concrete. It also would have been nice if Starboy’s mental illness would have been a bit more specifically defined rather than just generic crazy.

Like with most of these DC Animated movies, the action scenes were quite impressive. There were plenty of fights throughout the movie and with so many different heroes and villains, there was always something interesting going on. And since it was in the more grown up series of movies, there were a few surprising deaths alongside a couple unnecessary-but-not-overly-distracting swears. When Killowog gets stabbed through the chest, it’s a bit of a shocker despite the fact that it’s not entirely clear if he’s actually dead as his ring never floats off. There’s also a handful of civilian deaths that are somewhat brutal, though not overly gory. One of the biggest shock moments is early on when the Justice League first faces off against three of the Fatal Five and Superman starts bleeding out all over the ground. But really the most adult moment and the most touching one is when Starboy sacrifices himself to save the Sun and by proxy the Earth. Jessica Cruz then ends the movie with a touching eulogy where they are joined by other members of the Legion. All in all, it’s a great film that makes me want to go back and check out Justice League and Justice League Unlimited as I’ve heard nothing but great things about it. This was also a great showcase for Jessica Cruz and I’m always happy to see superhero movies get more diversity one way or another. Until next time, this has been Bubbawheat for Flights, Tights, and Movie Nights.