← Justice League vs the Fatal Five
Chicken With Plums →

I’ve been a fan of anime for a long time, back when it was referred to as Japanimation, and while I’ve heard of the series My Hero Academia, I’ve never watched an episode. Similar to Tiger and Bunny, the other anime superhero series that spawned a couple movies, this takes place in an alternate universe filled with people that have super powers. Similar to most anime movies that follow a series, this is more of a side story that brings in several of the characters. It took a little while to get into the world of the movie, and while I didn’t connect with all of the side characters, I really got into it by the end. 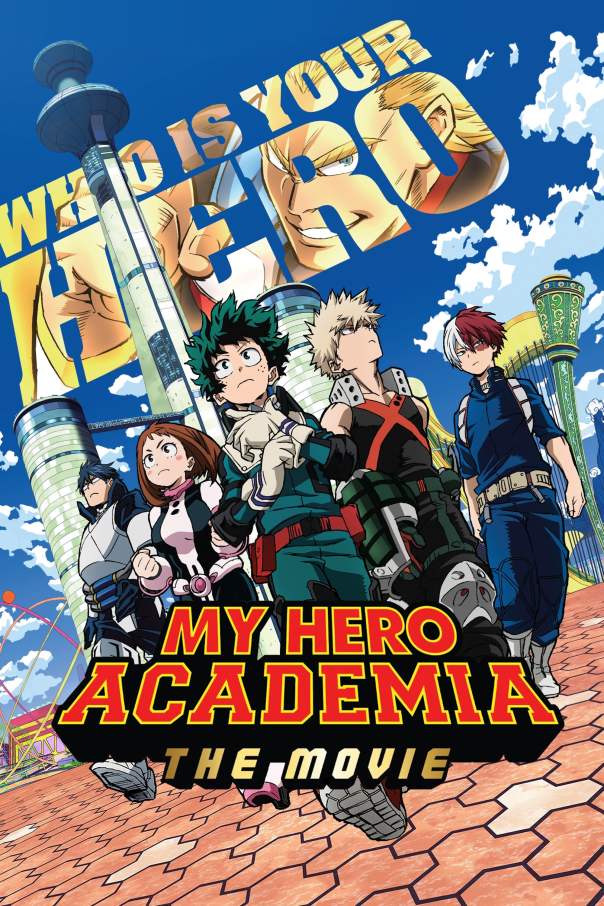 Since this is a post-series movie there is a mix of introduction for those who haven’t been following the series, but there’s also plenty of nods and lesser characters that have very light introductions but would be familiar if you had already seen the show. The two main characters and the overall world of the movie are given a pretty decent intro where some event gave about 80% of the world super powers which are referred to as quirks. Many of the most powerful quirks have become superheroes. One of Japan’s most powerful heroes is All Might who has the quirk called One for All which gives him massive amounts of strength and the ability to pass this onto someone else. That someone else is a young kid named Midoriya who didn’t have a quirk of his own but is now training to become a hero at one of the most prestigious schools for heroes. The intro works well to introduce All Might in both his musclebound hero form and his gaunt non-powered form.

The rest of the characters are a bit more hit and miss. They all have their own quirks and the majority of them are obviously other students from the same school Midoriya is from. They vary among how heroic they all are, the guys are the more traditional heroes like the ones who can become invulnerable or shoot fire and/or ice. The others have less traditional powers like the ability to create matter, have headphone jacks hanging from their ears, or can remove sticky globs from their head that kind of resembles hair. There’s also the new character introduced for the movie with the non-quirk daughter of the scientist who developed All Might’s suit and was an old friend of All Might. And not only that, but she ends up being the potential love interest for Midoriya. Although it does take the route typical of many of these types of anime where Midoriya has a bit of a crush on her but the movie never really expands on their relationship outside of that. 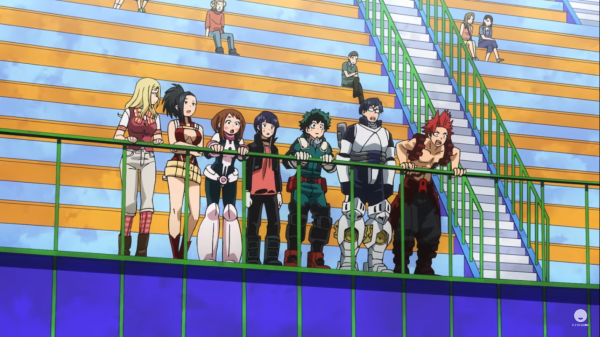 The actual plot has a few twists and turns with a touch of an overall mystery going on. Since this is a movie outside of the series, All Might and Midoriya have gone to an island that’s full of scientists working on research for the world’s heroes and during a celebratory gala, the island gets taken hostage by some villains and the whole thing turns into a touch of Die Hard on an island…with superheroes. The actual espionage-ish stuff is a little bit on the boring side as the students band together to try and get to the top of this 200 story tower which involves a lot of stairs and a few passageways. There’s a couple spots where they pause to have some fights, once with a couple quirk-powered henchmen, and a few times with a swarm of small droids designed to withstand attacks from villains with quirks including the hero-in-training students. Neither the henchmen nor especially the droids have much personality though they both accomplish the task to create an action sequence with the students.

The real mystery comes to a head towards the end and the climax is really what brings this film together and made it an enjoyable watch. There is a bit of a set up with All Might mentioning a big time villain called All for One though the connection is a little unclear and he’s mostly set up as a behind the scenes villain. But All Might’s scientist friend David ends up being the one that engineered this hostage situation in order to retrieve one of his shelved experiments that would be able to increase the power of a quirk a hundred-fold. It worked well with the sub plot about how All Might’s powers have been fading as time has worn on, moreso after he passed his quirk onto Midoriya. But David didn’t know about his ability to pass on his quirk. There’s double crosses with David’s scientist partner and the leader of the villains hired for the hostage situation who wants the prototype for himself. And it all adds up to a fantastic action sequence between the lead villain who is basically Magneto at the height of his powers and the team up of All Might and Midoriya with the rest of the students backing them up. It really feels like the bulk of the animation budget went into this climactic fight and it’s worth it. There’s so much going on, but it’s all able to be followed and it has a very anime feel to it. Plus, there’s all sorts of emotional and dramatic baggage going on that makes it hit home a bit harder.

While the film dragged quite a bit in the middle, it does a good job at setting up the world of the anime as a whole and especially the main characters. The side characters and villains don’t get much in the way of personality, but the overall mystery and climactic final battle really make up for those shortfalls. I’m not sure if I would put this above Tiger and Bunny in terms of an anime superhero world as its presented, though I would still be curious to check out the series at some point in time. It’s fun and I especially wasn’t completely lost coming into this movie with a blank slate. Until next time, this has been Bubbawheat for Flights, Tights, and Movie Nights.

← Justice League vs the Fatal Five
Chicken With Plums →