Your deep dive into the top 100 Superhero films of all time!

Why Women Superheroes Had Trouble Getting Films Made

This film took me a long time to watch. Seriously, and I wish I wasn’t joking, this took me 4 separate sessions over a couple of weeks to finish. I would press play, get about 25 minutes in and just have to pause it. What does that mean for this review? You’re about to find out.

This film was hard to watch, but maybe not for the reasons you might think. I’m sure some people will happily take it as a sign that women cannot helm a major film. They are wrong. Others might take it to mean that I have an issue with the character in general. They would also be wrong. My main problem with this film is one of pacing. It’s the same issue I have with some of the older superhero films, where some parts just take AAAAGGGEEESSSS to get going, while other parts are over way too fast. I have another issue with this film, but I’ll get to that in a moment.

END_OF_DOCUMENT_TOKEN_TO_BE_REPLACED

Even though I had just complained about the difficulty in reviewing these DC SuperHero Girls movies because they are so similar in nature, I still decided to watch and review another one back to back. At least this time I was pleasantly surprised by the return of the LEGO style humor that was laced throughout the movie that helped keep my interest up more than several of the previous iterations. There were a handful of fun little callbacks to the history of DC superheroes, but there were still issues with too much stuff going on and an overreliance on newly introduced supervillain Lena Luthor. Of the four of these SuperHero Girls movies that I’ve watched, I would say that this has been my favorite so far, but they’re all right around the same level of mediocre, but good for young girl superhero fans.

END_OF_DOCUMENT_TOKEN_TO_BE_REPLACED

One thing that I realized while watching this movie is that it is going to be increasingly difficult to review more movies in this series without getting too repetitive. I’m going to try my best, but this is only the third of these movies that I’ve watched and I feel like I’ve already said everything that needs to be said in the previous two reviews. And there’s three more of these that have already come out left for me to watch and review. But while these aren’t the greatest in cinematic creation, they aren’t completely insufferable and they generally clock in at the standard for DC animated films being just an hour and fifteen minutes. The one thing that I am slightly curious about is if there is any continuity between the movies going forward, especially as they switch from regular animation in this movie to LEGO animation for the next several.

END_OF_DOCUMENT_TOKEN_TO_BE_REPLACED

The third entry in my series shining a light on underappreciated superhero movies through the eyes of the fans that love them. This time around I’m shining the spotlight onto 1984’s Supergirl with the help of guests Jermaine Dickerson from Jermaine Design, Todd Liebenow from Forgotten Films, and Andrew Wickliffe from The Stop Button. I hope you’ll join us in taking a look at some of the brighter points of this movie that for many hasn’t stood the test of time, not that it even was ever successful in the first place.
END_OF_DOCUMENT_TOKEN_TO_BE_REPLACED

Last week I talked about Black Superheroes in movies and there’s not very many of them, and there’s only a couple good ones in there. And I’m getting close to finishing up the movies for February so I thought I should make a plan for what to watch in March. There aren’t any new movies coming out until The Avengers in early May so there’s no help there. I looked it up online and like February is Black History month, I saw that March is Women’s history month. Then I went to my list of movies to look for movies that have a woman in the lead superhero role. I only found 6. Two of them I had already reviewed and they were awful, Supergirl and Catwoman. The next four didn’t seem to be much better, My Super Ex Girlfriend, Elektra, Barb Wire, and Tank Girl. I think I’ve heard mixed reviews on Tank Girl, but the rest are really bad.

END_OF_DOCUMENT_TOKEN_TO_BE_REPLACED 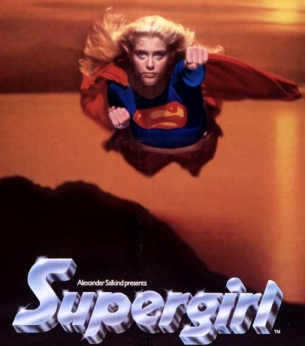 So it’s Christmas afternoon, the presents have been opened and we’re just spending a relaxing Sunday Afternoon together as a family. And I decided to ruin it by looking up Supergirl for us all to watch together this holiday afternoon. Ok, that’s a little bit of an exaggeration but the movie was not that enjoyable aside from the ability to laugh at it when it got so bad it was just plain funny. Of course, since it was Christmas afternoon, and Jena got quite a few presents for herself, she paid almost no attention to the movie, preferring to play with her newfound Angry Bird plushies, Monster High doll, and a Rainbow Brite and Sprite doll.

This was made shortly after Superman III and it’s really in the same vein as that movie, but it didn’t have a well known comedian making funny on the screen, it just had Faye Dunaway hamming it up as Selena with a spotlight shining on her face in every single closeup. It reminded me of Morticia Addams in the Addams Family movies. I always thought in those movies it was done for some comedic effect, at least I thought it was funny. Anyway, she played a witch who seemed to have only recently converted because of her warlock boyfriend, although she felt she had already outgrown him and wanted to strike out on her own for more power.

But I’m getting ahead of myself, while she does take up an ample amount of screentime for her character development as a villain, and by development I mean that she wants power, she gets power, and she gets destroyed by a stronger power. The movie however starts out on Krypton. Well technically it’s not Krypton since that got destroyed, but it’s a city full of Kryptonians that somehow survived the destruction of Krypton and are now living using the power of the spinning globotron. That’s not what it’s actually called, but that’s how I remember it as. Zaltar “borrows” it and lets Kara play with it until she loses control of it, it gets sucked through the wall, into space off to Earth, and straight into Selena’s lap. Zaltar exiles himself to the Phantom Zone while everyone else worries that they will die in a few days without power so Kara takes it upon herself to follow the globotron to Earth and retrieve it.

Did I forget to mention that Kara is Kal-El’s cousin? So when she arrives at Earth she comes fully dressed as Supergirl even though no one was dressed like that on Krypton, I mean Argo City. She shows off some of her powers, including fighting off a couple drunk horny truckers before stumbling upon an all girl’s school and revealing her power to create clothes and change haircolor out of nothing. She cons her way into the girl’s school with a fake reference letter from her cousin Clark Kent and sets up a fake identity as Linda Lee. Because obviously if she would have used her real name Kara then everyone would know who she really was… um… yeah. And to tie her even more into Superman, she ends up rooming with Lois Lane’s little sister Lucy.

Now I’m only familiar with Supergirl from Smallville and from what I remember she’s not too far off from her Smallville counterpart. She’s rather naive but she’s a quick thinker and can take care of herself. Lucy Lane also has some familiar traits, like being headstrong enough to try and stop the runaway construction equipment herself. And Jimmy Olsen makes a return appearance as Lucy’s boyfriend and the only real tie in to the Superman movies aside from a poster in Lucy’s room and the quick radio announcement explanation why Superman isn’t around. 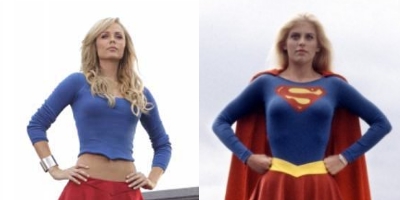 They tried to shoehorn a love interest into this movie by way of a personality-less prettyboy gardener for the girl’s school who Selina falls for and tries to concoct a love potion which of course goes awry and makes him fall for Linda Lee instead. I’m sure no one saw that coming. He supposedly snaps out of it halfway through the movie yet continues to have “real” feelings for both Linda and Supergirl making the connection between them through a kiss. The action scenes were all a joke as well, the first action piece is when Selina sends her shadow demon after Linda which has some pretty decent set up as a giant invisible monster. And yet Supergirl defeats it by charging a lamppost with lightning and shooting it at the beast. I wish I was kidding. The next action scene is when the boytoy gets captured by a giant piece of construction equipment that starts running loose around town. Supergirl stares at the destruction it’s causing for what feels like several minutes before finally jumping in and riding along with it for a bit and ripping the claw off, saving the guy. And the final action scene is mostly a bunch of wobbly glowing floor tiles and a big demon.

If I had to pick something about this movie that I liked, I thought Helen Slater’s performance as Supergirl was pretty good considering all the crap acting around her. There were a few of the flying sequences that were well done and I really loved Selina’s sidekick. I think she was about the best part of the movie. She reminded me a lot of Karen Walker since she always seemed to have either a cigarette or a drink in her hand. It was a shame that she got caught up with Faye in the Supergirl twister thingy that defeated them. And at least Supergirl didn’t have to give everyone amnesia kisses at the end, she just got them agree to not tell anyone about her before heading back to Argo City hopefully in time before everyone died. But of course we never know since it just happens during the credits. We do see the lights go on, but we don’t know if anyone besides Kara was still alive. Oh well. Until next time, this has been Bubbawheat for Flights, Tights, and Movie Nights.