The Curse of Three

The Curse of Three

aka Why is the Third Superhero Movie the Worst?

Sequels have long been a sure sign of a bad movie. Take an existing popular movie, try it again and see lightning strikes twice. Most of the time it didn’t. Then somewhere along the line, maybe in the late 80’s early 90’s, filmmakers started making sequels that lived up to the original’s expectations. Or oftentimes in the case of superhero movies, exceeded them. Especially in superhero movies, once the origin story is out of the way, the sequel is the best place to get a good action filled story in. But then something else happened, it started with Superman III. Where the sequel was as good as the original, the third movie went way downhill in terms of plot, action, and just overall quality. Is it a curse, often times it doesn’t matter whether the third movie has a bigger budget or a smaller budget, the same people behind the scenes or new ones, they almost always end in crap. Is it a curse, and can it be broken?

END_OF_DOCUMENT_TOKEN_TO_BE_REPLACED 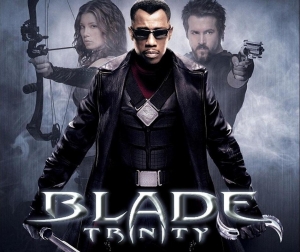 I’ve been feeling awful all day with an annoying runny nose and sinus headache while running all over town running errands. But I finally get to cap it off with a movie I remembered really enjoying as the last movie in the great Blade Trilogy. As a minor side note, I keep thinking this movie’s subtitle is actually Trilogy instead of Trinity. It wasn’t an awful movie by any means, but there was a lot of stuff in it that I completely didn’t agree with or didn’t make sense that I must have completely overlooked the first time I watched it.