← What makes a good villain?
Teenage Mutant Ninja Turtles II: The Secret of the Ooze →

It’s Tuesday night and our stack of movies from the video store is not getting any smaller so I decided it was time to put in the first Teenage Mutant Ninja Turtles live action movie. I have seen all three turtles movies when they first came out, probably in theaters but I don’t remember for sure. I had also watched and loved the cartoon series, so the worse parts of this movie may very well get glossed over with nostalgia, just a fair warning to anyone looking for a hard hitting review. And this movie has a lot of nostalgia and some surprises to my less than stellar memory. It’s a lot more violent than you may first expect, but it still has a lot of that late 80’s and early 90’s style humor.

If you grew up in the 80’s like I did, there’s a good chance you’re familiar with the Ninja Turtles, it was a hugely popular after school and/or Saturday morning cartoon, and as a side note, the voice of Raphael from the cartoon and soon to be the voice of Donatello in the upcoming new cartoon Rob Paulsen has a great podcast that I listen to every week that talks about voice acting and all sorts of other stuff. You can find that at his website RobPaulsenLive.com. The Turtles were originally an independent comic book and the movie was for a long time the highest grossing independent movie of all time. In the unlikely event that you don’t know about them, it’s a group of four human sized turtles that were taught Ninjitsu by their human sized Rat mentor named Splinter. They act like teenagers and speak with a lot of 80’s surfer style slang. This live action movie had performers in life sized suits and great puppeteering by Jim Henson studios including Kevin Clash who does the voice and the main puppetry for Splinter and would later go on to become Elmo. Splinter was definitely an amazing performance and a great character in the movie.

Can you believe the same guy that does this voice also does Elmo?

The look and feel of the rubber suits in this movie hold up surprisingly well for me. Jim Henson’s animatronics are excellent and surprised me with how expressive they are. I had forgotten that it was Jim Henson behind this part of the movie and I was expecting something closer to the original Planet of the Apes. But the facial expressions, especially with Master Splinter were all very believable and well done. The designs also look like they were directly lifted from the comics. The look of the Foot clan and Shredder, the main villains in this movie looked very great as well, feeling like they were lifted straight out of the cartoon yet still believable as something that could be in the real world. One thing I didn’t like as much in this movie was the fact that in the cartoon, the Foot Clan were a faceless, seemingly endless supply of ninjas for the Turtles to face off against. In this movie, they put faces to those ninjas, and those faces are runaway teenagers. It’s a lot harder to root for the Turtles when the villains they are facing off against start to become too sympathetic. 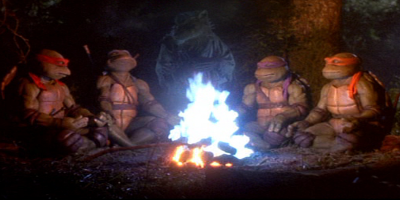 Who brought the smores? Oh yeah, that would be Donatello.

The feel of this movie jumps around a lot, there is a lot more serious moments than I remembered, and yet it’s undercut with a lot of goofy humor. There’s a scene where Raphael goes off on his own and is beaten nearly to death before the Turtles have to retreat to April’s old farmhouse in the country. Both Raphael and Leonardo felt the most developed out of the four Turtles, and each had interesting character developments. I suppose I should mention the other two characters in this movie, April O’Neal, news reporter and the Turtle’s first contact with the real world, outside of pizza delivery men. The actress that plays her does a pretty reasonable job, and I enjoyed the fact that they gave a quick nod to the cartoon series by having her in a bright yellow trenchcoat for one scene early in the movie. But she wasn’t anything really special or memorable. Casey Jones is the other character who’s kind of thrown into the middle out of nowhere. He’s a costumed vigilante who seems to be homeless, at least he doesn’t offer to use his house when they come back to the city, and he fights with various sports equipment rather than martial arts. I thought he was pretty much the same as April, doing a passable job, but nothing memorable came out of him either. It’s also rather dark that he’s the one that takes out Shredder at the end, crushing him to death (off camera) in a garbage truck. 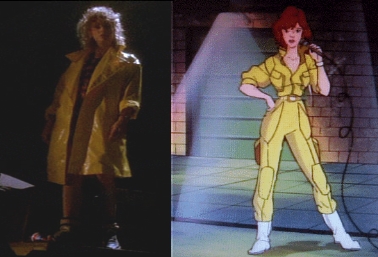 I think it's funny that they seemed to play down her red hair, and yet played it up when she played the mom in Halloweentown.

The humor in this movie can be very hit or miss. Most of it is very childish and sophmoric, and yet it still managed to make me laugh most of the time. I imagine a lot of that is sparked by the general nostalgia that TMNT brought to me personally. If you didn’t grow up with the Turtles, you might not enjoy the jokes as much as I did. A lot of the pop culture references were dated, and yet chosen in such a way that many of them are still relevant due to their use of timeless icons like Humphrey Bogart, and Rocky, which has had a somewhat recent sequel. There’s also a lot of physical slapstick humor, but I enjoyed the way it was done.

The one weak point in this movie would be the action. The fight scenes are all pretty good, but they weren’t stand out examples of great fights. I imagine it’s pretty hard to do ninja moves in a giant rubber turtle suit, but the actors made it feel natural. The only real weak point is just that it’s not that visually interesting compared to fight scenes in newer movies. But for the time, it gets the job done. Even though Jena picked out the movie, she lost interest for a while during the middle. Unfortunately that was largely due to the scratched up disc that we were having problems with, but she came back for the last third of the movie and thought it was “great”. She didn’t latch on specifically to any of the characters, but seemed to like the fight scenes. As with many movie series, I seem to remember them going downhill from here, but I suppose I will find out soon enough. Even though I haven’t had any comments on it one way or the other, I think I will debut a new feature here on Saturday where I look at a short fan film from YouTube. Any ideas on what to name it? Leave a comment and let me know. Until next time, this has been Bubbawheat for Flights, Tights, and Movie Nights.

← What makes a good villain?
Teenage Mutant Ninja Turtles II: The Secret of the Ooze →