← X-Men: First Class
Superhero Shorts: How It Should Have Ended →

Welcome to another edition of Follow Friday where each week I feature and interview a fellow blogger and follow their suggestion to another blog to feature next week. I prefer this over a blogroll because it gives each blog their own time to shine, plus I personally rarely click on blogrolls so why would I expect you to? Not only that, but I get the chance to check out some great blogs I might not have found otherwise found, talk to some great people, and share the conversation with you. So this week I was directed by M over at The Smoking Pen to check out a fellow niche blogger that focuses on movies about crime and the anti-hero, Criminal Movies 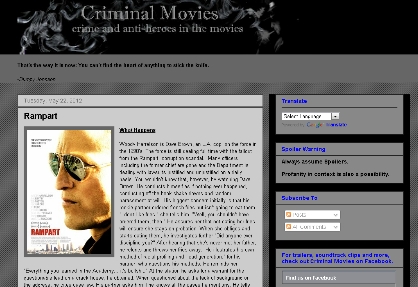 I’m not just a fan of the superhero, but I also love anti-heroes so I found several of my favorite movies on his site like Fight Club and Insomnia plus plenty of other movies that I haven’t seen but could easily make it to my must-watch list. I can tell that Brent has a great understanding and love of movies and it really comes off in his posts. He’s got a ton of great top 10 lists that are always fun to read too. But enough from me, it’s time to let Brent himself do the talking as he answers a few of my questions.

Bubbawheat: As a fellow niche movie blogger I appreciate the fact that your site is focused on a smaller genre of film. What made you decide to make a site dedicated to crime and anti-heroes rather than just cinema in general?

Brent Allard: I’ve always liked Crime Movies but I went through a film noir phase a long time ago while I happened to be studying the “Hero’s Journey.” I believe I was watching Double Indemnity and it occurred to me that Fred MacMurray’s Walter Neff character, while not a hero possessed a lot of the characteristics of a hero. He was willing to risk everything and showed great courage and resourcefulness, although his scheme was clearly an immoral one. He wasn’t a mustache twirling villain but a guy doing everything he could think of to get the girl. From there, I was fascinated with looking at the anti hero as a mirror of the hero myths. I started realizing that this was everywhere and that a lot of our modern cinematic “heroes” had shifted to being anti-heroes. Perhaps because we like our characters and their universes to be more realistic. As far as sticking to the niche, I was really more interested in exploring the theme of the anti hero than to reviewing films in general.

BW: I agree, there’s a lot more realism to the anti-hero vs. just a hero. What is it that appeals to you the most about the anti-hero as a character?

BA: “Hero” characters are hard for me to care about. They tend to be so idealistic and larger than life that I can’t appreciate their motivations. It’s easier to relate to someone who is affected by the world around him, because the world changes everybody. The anti hero displays their humanity for everyone to see. They often possess some heroism but they’re not trying to save humanity, just live their own life, or settle personal scores. Very often some heroism comes through, but it’s always at a cost to an anti hero character, which makes a lot of sense to me. I can’t feel for an untouchable protagonist, who’s so far above everything he might as well be from another planet. A hero typically works for the status quo, while an anti hero works against it. As someone who distrusts groups and dislikes pointless rules, I can cheer for that. It’s why I prefer Clint Eastwood Westerns to John Wayne Westerns.

BW: It’s not quite the same, but I typically prefer the “flawed superhero” over the superhero with almost no flaws such as Superman. I’m sure you have lots of favorite movies that you’ve featured on your site, but what’s your favorite movie that wouldn’t fit in the anti-hero genre?

BA: There’s so many! I like all sorts of genres and watch them all. For today I think I’d pick “Spring, Summer, Fall, Winter…And Spring” a South Korean film by Kim Ki-Duk. It’s a lovely film about a boy growing up on an island monastery with a monk and how he grows into adulthood.

BW: What genre do you think provides the better anti-hero, westerns, mobster movies, or something else?

BA: I think Westerns have produced the most iconic anti heroes. The Spaghetti Western, especially Clint Eastwood’s Man With No Name roles have really paved the way for the rest of them. Gangster films are right up there too though and more in keeping with modern sensibilities. I think the best genre for them is the “man against the system” movie, which can have any setting, as in “Cool Hand Luke” and “One Flew Over the Cuckoo’s Nest.”

BW: I actually got caught slightly off guard on one of your top 10 lists that spoiled One Flew Over the Cuckoo’s Nest for me. I say “slightly” because you do have a large warning for spoilers at the top of your sidebar, and I don’t feel “spoilers” actually spoil the movie. I also noticed that you avoided any spoilers in your Fight Club review. What’s your general thoughts on spoilers on movie sites?

BA: Fight Club was one of my earlier reviews and a rare film where I think the spoiler has a big impact on the story. If I had done that one today I would’ve likely given the spoilers just because the film has been out for a long time now. I usually won’t give spoilers if it’s a very recent movie, but if it’s been out for ten years and you haven’t seen it, especially in the case of iconic movies like “Fight Club” you’re likely to run into spoilers on any TV program or movie that makes pop culture references. Personally, I think if a movie is good and has a smart story with great performances, spoilers won’t ruin it for me. Good movies that rely on a hidden twist to work (Fight Club, Sixth Sense) are really few and far between. I do think that if you give spoilers, you should give a warning though to give people a chance to avoid them.

BW: What kind of storyline do you think best highlights the anti-hero? My personal favorites are revenge stories such as Payback and The Punisher (2004).

BA: Good call. The revenge movie is probably the one best suited to the antihero character in that we get to see the whole journey. Once we see a regular guy lose his whole family (as in the Punisher) we can accept that he’s capable of doing anything and even risk his own life to set things right (or as right as they can be.) Death Wish is another good example, Charles Bronson is just an engineer, but once the tragedy happens, we can’t wait for him to do something about it.

BW: As always, I have to ask what is your favorite superhero movie?

BA: I’d have to go with the first Sam Raimi Spiderman, largely for sentimental reasons. I think it proved a lot of things could be done in a Comic Book Movie that hadn’t been seen before. I was happy with those terrible 1970’s Spiderman TV Movies, so the Raimi film just blew me away. I remember bringing a now departed friend out to see “Lord of the Rings” for his birthday, when the Spider-Man trailer came on. He was so excited at just the trailer that he jumped out of his seat. The rest of the audience was nearly as enthusiastic too. It was a pretty magical thing!

BW: And what blog do you suggest that I follow for next week?

BA: I’d suggest taking a look at J.D. over at Radiator Heaven He’s a great writer, with an amazing amount of film knowledge. He’s also great at working in background information on films.

Thanks for doing this feature and including my blog! This was a lot of fun.

I’m glad you had fun, I enjoy this feature more and more each week. Looking forward to checking out Radiator Heaven. Until next time, this has been Bubbawheat for Flights, Tights, and Movie Nights.

← X-Men: First Class
Superhero Shorts: How It Should Have Ended →