Confessions of A Superhero

Confessions of a Superhero 2007

I was asked by Dusty of Dusty On Movies to write a guest review for his Quirky Documentary Series. I had heard a little bit about this film, Confessions of a Superhero, but when Dusty asked me to review it, I thought it was a good change of pace. It’s presented by Morgan Spurlock, of Super Size Me fame, but he doesn’t really have anything to do with the documentary. The main focus is on four Hollywood street performers, although performers is kind of a strong word for what they do. They dress up as superheroes, pose for pictures, and take tips. The four heroes featured in this movie are Superman, Batman, Wonder Woman, and the Hulk. Although Superman seems to get the most screen time out of the four. They all claim to be actors who just haven’t gotten a gig yet, and they’re all varying degrees of normal. 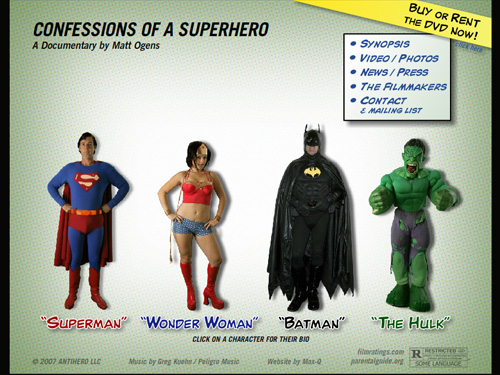 Superman gets the most screen time, and I have to admit that he’s the most interesting out of the four. He is completely obsessed, head to toe, with Superman. He does fairly resemble an older Christopher Reeve, and his outfit closely matches the one from those movies. But on top of that, his apartment is filled to the brim with Superman merchandise. Posters, action figures, mugs, movie props, anything that’s related to Superman at all. Not only that, but he seems to have invented part of his past. He claims that he’s the son of actress Sandy Dennis, but he was a troubled youth and his father left when he was young, and his mother couldn’t handle him so she gave him up to youth homes. The filmmakers were able to talk to the Sandy Dennis’s niece and brother who both deny ever knowing that she had a son. During the filming of the documentary, Superman also gets married to his long term girlfriend during a Superman festival in Metropolis, Illinois. Out of all four of the performers, he’s the one that’s been doing this the longest, takes it the most seriously, even if he’s in denial that it’s not a dead-end. He’s even shown at one point during the beginning of the movie mentoring a Ghost Rider performer. 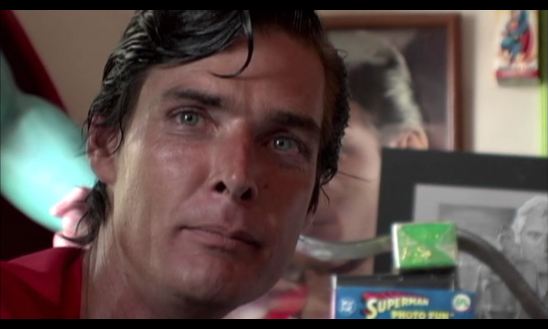 This was when he was talking about the death of Christopher Reeve, something that really touched him.

I should also mention that there’s no filmmaker presence in this documentary, it’s all presented directly with interviews of the performers, their loved ones, and some archival footage. The one thing I didn’t much care for is that they used oddly staged photographs as scene breaks, like Superman in his merchandise-filled apartment drinking from a gallon jug of milk, or Wonder Woman looking in the trunk of a car while two guys stare at her ass. I was never really sure of the point of any of the photographs.

The other performer with a lot of screen time was Batman. He’s a very strange individual. Like Superman, he has issues with his past. His story is that he worked for the mob for a while, and has extensive martial arts and weapons training. Not only that, but he was an enforcer for a while, and he managed to get out of the mob by killing everyone around him. They film him at one point practicing martial arts with a class, and he was getting everything wrong. They also showed him in his apartment doing moves that looked just plain awful. Even his own wife suggests that the stories that he tells about his past are likely less than half truth. He also admittedly has anger issues, and during the course of the documentary was arrested in costume, harassing some union workers.

The other three performers

I think out of all of the performers, the most normal out of the bunch would have to be Wonder Woman. She’s a country girl from Tennessee whose parents let her go to LA to try and become an actress, because that’s what she wanted to do with her whole heart. She met a guy early on, got married after a couple weeks, and leaves him towards the end of the documentary. The filmmakers also get a fairly close look at her non-performance life, talking with her parents, showing several home video clips, and following her to trips with her acting coach and agent. Out of the four, she’s the only one who actually went on to get any acting jobs, even if they’re mostly small roles as far as I can tell from IMDB.

Finally, there’s the Hulk who is definitely the most sympathetic out of the four performers. More than any of the other three, he is the most realistic about what he does, admitting that he’s basically panhandling in a big green suit. He wears a giant padded body suit that covers his entire face, and must be excruciating to wear in the LA heat. At one point he even mentions that he blacked out during a record heat. When he came to LA, he was homeless, although they never really got him to talk about how he started wearing the Hulk getup in the first place. By the end of the documentary, he also has hope with a small role in an independent comedy. And he also has gone on to get a few more roles, however insubstantial.

This documentary may not be the most in depth look at the lives of these four people, but it held my interest. All four people were very different from one another and the movie did a good job at trying to show the actual people behind the superhero performer personalities. There were a few strong moments like when Wonder Woman starts talking about the troubles with her relationship, or when you see the joy in the Hulk’s face when he’s getting in full makeup for his first movie, even when you see Superman talking about Christopher Reeve’s death. But in the end, it still felt like a fairly superficial look into their lives. But it was an interesting experience. I know there’s a few other superhero related documentaries out there that I may look for. Until next time, this has been Bubbawheat for Flights, Tights, and Movie Nights.