Superman and the Mole Men

Superman and the Mole Men 1951

Whenever I see lists of superhero or comic book movies, typically the first movie on that list is this one. Superman and the Mole Men is generally considered the first full length superhero movie even though there were serials for both Batman and Superman before this one. I knew practically nothing about this movie before I watched it other than it was in black and white, it starred George Reeves as Superman as it was essentially the pilot for the television series, and it had Mole Men in it. I was expecting a cheesy, old timey movie with bad fight scenes between Superman and some Mole Men. What I got instead was something a little closer to the Twilight Zone where the Mole Men aren’t actually the antagonists and there is a lot more morality issues going on than I would have first expected. It did have some goofy old timey qualities to it considering that I rarely watch a black and white movie. In fact I can count them on one hand. But it was a lot better movie than I expected it to be. It’s worth a watch if you’re a fan of Superman and you enjoy the occasional classic movie.

The titular Mole Men are a result of a small town whose biggest claim to fame is the deepest oil well in the world. Of course it’s funny to hear them talk about going six miles beneath the surface only to find out that the Earth is hollow, and there is a race of little people with extra large heads wearing black leotards that somehow screams “mole” to everyone in this movie. But if you can look past the signs of the times, these Mole Men come through the well’s hole and are immediately met with fear and distrust, exacerbated by the fact that everything they touch glows in the dark, which the foreman as well as Clark Kent immediately expect it to be Radium and dangerous to anyone nearby. Also, the first person they come in contact with is an elderly night watchman who suffers a heart attack upon seeing them, dying from fright. Invariably they eventually find a little girl who is completely unafraid of them and treats them nicely, only to be met with the shrill scream of her mother when she comes in the room to find them. The rest of the film plays out as you might expect, the town led by mob mentality goes after the two Mole Men and it’s up to Superman to stop them.

At least they have each other to comfort.

There are few fight scenes in the movie, most of the conflict is between Superman and leader of the mob Luke Benson. I was a little disappointed that there wasn’t the stereotypical scene where Luke fires all of his bullets fruitlessly at Superman and finally throws the gun at him. Instead, he merely throws a punch. Superman also saves one of the Mole Men who gets shot on top of the dam and falls. It’s kind of weird to think of Superman nowadays without any big action setpieces, but I think for the most part it worked here. The one very dated special effect scene was Superman when he catches the Mole Man from the dam in a very jerky, very brief, stop motion scene. There’s also an oddly drawn out scene with a giant ray gun aimed at Luke. For all their advanced-looking technology, it didn’t seem to be a very effective weapon, making Luke squirm in pain, but with no apparent lasting effects.

The other thing I wasn’t expecting is that while this is a Superman movie, Clark Kent actually features quite a bit more than Superman. George Reeves and Phyllis Coates as Lois Lane have a nice dynamic, although Lois is extremely clueless, and Clark is awful at hiding his secret identity. There are several times at the end where he slips up and has to correct himself when talking about Superman, and also has some broad knowing hints about his identity. He spends most of his time either investigating what is really going on at the oil well, which is being closed down, or arguing the morality of attacking and killing these creatures when there isn’t any proof that they’ve done anything wrong. There are also a couple fun times when the style and language of the times creates a different type of moment, like when Clark first stays behind at the well to talk with the foreman and says “you know why I stayed behind, don’t you?” with a sly smile. 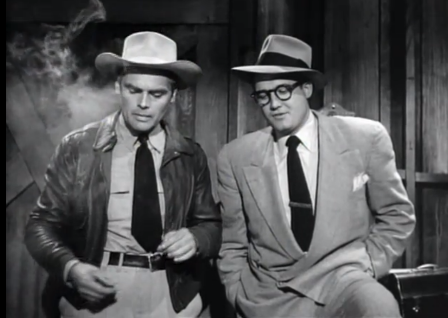 It also reminded me a little of Family Guy’s high pants, fast talker.

I mentioned at the beginning that this movie felt a little bit like an episode of the Twilight Zone, but I should clarify that a little bit, it felt like one of the mediocre episodes of the Twilight Zone. It’s still a good story, but it’s not anywhere near the level of some of the best episodes of the TV series. Clark Kent was a little too single-minded even though almost everyone was against him, and he’s going on just as much speculation as anyone else, his speculation just happens to be the correct one after all is said and done. He does begrudgingly save the antagonist from his fate at the hands of the Mole Men, and when they do go back down into the well, they destroy the oil well behind them, showing that they want to be left alone, and they will leave us alone. Doesn’t quite sound like the right type of message for this kind of story at the end of the day. But it is an interesting look at one of the first attempts at a superhero movie, and I did rather enjoy it. I’d even love to check out some of the classic George Reeves TV episodes. Until next time, this has been Bubbawheat for Flights, Tights, and Movie Nights.