I’m down to the last few films left on my 100 Essential Superhero Movies list and the perfect excuse came for me to revisit the Men in Black trilogy when I was offered to guest on the As You Watch Podcast. Or you could say, offered to make my triumphant return considering that I am one of the founding members of the podcast. But as for the movie, I initially questioned whether or not to even classify Men in Black as a superhero movie vs. a comic book movie, considering the fact that it is based on an indie comic book that was later published under the Marvel label before the movie was made. It does follow enough of my own qualifications for me to include it: It’s set in the modern day, the heroes have superhuman abilities via the alien technology, they also have a costume of sorts, they also have a secret identity of sorts considering that they lose their normal identity when joining, and they are fighting something that is superhuman. I’m certain that I had seen this in theaters back when it was released and the song is ubiquitous with the movie as well. It was a lot of fun revisiting this film even though there were a few moments that definitely felt a bit dated this time around.

Besides following several of my qualifications for being a superhero movie, it also pretty much follows the typical superhero origin story. As Will Smith’s J performs an extraordinary act of catching an alien disguised as a human, he is noticed by the mentor figure K, played by Tommy Lee Jones. He is then brought into this somewhat parallel society within New York City inhabited by all sorts of extra terrestrials and agents with highly advanced technology. There’s also a bit of Alice in Wonderland as he essentially goes down the rabbit hole into the Men in Black Headquarters. There’s a great scene where J gets tested along with several other top candidates, where he shows his aptitude for parallel thinking when he pulls the table over to his chair, and when he shoots little Cindy during target practice. And all throughout, it’s peppered with great little moments of physical comedy and Will Smith’s charming personality. By the end of the movie, he has learned enough to become the hero he was born to be, or at least the agent. It more or less follows a by-the-numbers plot, but everything just works so well that it’s barely noticed.

Really, what works the best in this film is the chemistry between Will Smith and Tommy Lee Jones as agents J and K. Jones is perfect at playing the straight-faced, straight man to Smith’s fast talking rookie. By the end of the film it feels like they have been working together for years rather than days. It’s also nicely bookended with the conversation about looking at the stars, really looking at them. They’re quite beautiful you know. It started out with K’s old partner, and when I say old I don’t just mean his previous partner. Where Tommy Lee Jones was definitely showing his age when compared to Will Smith, his partner in the opening scene was rather ancient. 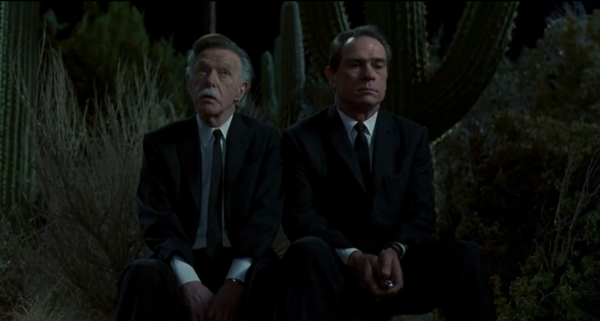 Another great aspect of this film is the villain played by Vincent D’Onofrio. He’s an insectiod alien wearing a human skin suit whose previous owner was a redneck named Edgar, or as his wife seems to call him, “Eggar”. His performance really holds up alongside Smith and Jones as a great reason to watch this film. He has such an odd vocalization combined with an amazing physical performance that makes it slightly more believable that it is actually an alien wearing a human skin with all of his twitching and flailing, really selling the fact that he isn’t comfortable in his own skin. It’s also helped by great makeup effects where as the film progresses, his skin becomes more and more pallid as if it is decaying right on his body. The only downside is when he does finally rip off his skin to reveal the giant cockroach-like being hidden underneath, it turns into the rather dated 90’s CGI, and he no longer has any spoken lines afterwards.

While the film overall is still a great piece of work, not quite everything stands the test of time. One aspect that was enjoyable on a first watch was the little bit of a twist surrounding the MacGuffin of the galaxy that they are searching for. While it may have worked on the initial viewing, the fact that the galaxy is actually something that is very small doesn’t hold up as an intelligent twist, instead it makes the Men in Black themselves appear less knowledgeable about the universe around them. It seems unlikely that they would have all of this information about these alien races, but not know about tiny galaxies which apparently are a popular source of energy according to the film’s own dialogue. Not to mention that J was valued for the fact that he thinks outside of the box and yet it took him a large amount of time before he even thought about the cat. There are also a handful of jokes throughout the film that really felt dated, like pointing out that Dennis Rodman was an alien and the joke is that it isn’t a very good disguise. 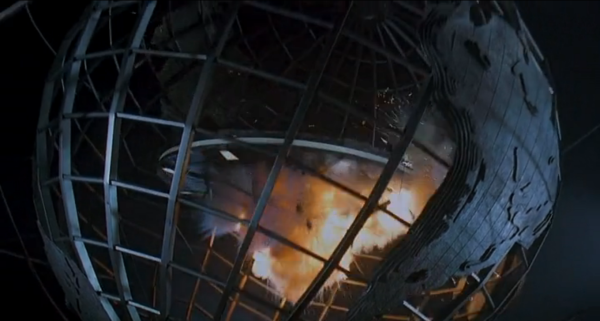 This is one of my favorite films and I’m surprised that it has taken me so long to revisit it. Aside from a handful of pop culture references and a twist that now makes me cringe, it was so enjoyable to see the origins of agents J and K again. While the early CGI peppered throughout the film doesn’t hold up too well, there’s enough of a mix between CGI and practical effects that it’s not too distracting, and most of the time the CGI is supposed to look alien and unreal which helps sell the effect. There’s nothing new about the duo of the comedian and the straight man, but Smith and Jones work together so well that it’s a sight to behold and well worth watching again. Until next time, this has been Bubbawheat for Flights, Tights, and Movie Nights.