Moving my way down in quality for this year’s Graphic Horror before hitting the planned high point at the end comes this lovely gem that came out the same year as the Matrix but with a wholly different interpretation of special effects. It actually started its life as a movie script, but was considered to be too special effects intensive at the time and so it was first made into a comic book from Dark Horse. John Bruno was cutting his teeth working on special effects under James Cameron before getting this film as a director, and unfortunately it really shows that he was more of a special effects guy than a full director. There are many issues with this film, but the special effects work really is not one of them. While there are a couple name actors with Jamie Lee Curtis and Donald Sutherland, they are definitely not bringing their A games. It’s a horror film with a small cast that doesn’t know whether it wants to be a slow burn thriller, a gore fest, or a survival action film, and the blending of these genres do not work very well at all. It has some fun moments here and there, but for the most part, it’s a rather boring slog-fest.

The basic concept of the film is more or less an excuse to showcase some gory robot effects that feel like a cross between Hellraiser, the Borg, and 9. There’s this alien life form based on electricity that hits the Mir space station and is transmitted to a giant research ship in the middle of the Pacific Ocean. The life form decides that the humans are essentially a virus that needs to be eliminated, but can also be used for spare parts to create these bio-electronic extensions of itself that look like Erector Set spider robots with bits of human flesh here and there. Meanwhile, Donald Sutherland and his crew are caught in a Typhoon where he loses his barge filled with uninsured cargo. Once they hit the eye of the storm, they manage to find the giant research ship that’s apparently abandoned and will fetch a mighty haul if salvaged.

The soothing blue tones of a homicidal alien life form.

One of the biggest problems with this film is the pacing. There is way too much set up everywhere, with the Russians at the beginning, to meeting the entire crew of the tug boat. It’s literally 55 minutes into the film before it gets to the first on screen death. Now in some cases, that would be a well paced slow burn that slowly builds the tension before finally bursting out with an on screen kill. But this is not that kind of movie, instead it spends more time trying to build the relationships between the characters, and there’s a hint of exploration and discovery rather than foreboding and danger when they get to the ship. Not to mention that all of the acting is flat combined with really poor dialogue. Donald Sutherland is supposed to be a desperate captain that has lost everything and has nothing to lose, but just comes off as a greedy opportunist. Jamie Lee Curtis is completely oversold as the righteous Ripley analogue who just wants to do the right thing and will obviously come out alive at the end. The rest of the crew are pretty much forgettable, though the token black guy has some great moments of comedy once the action finally starts happening in the third act.

The first great effect of the film.

What this film does have going for it are the special effects, while the early part of the film has several different erector-set looking spider robots that are obviously just basically slightly more advanced versions of remote controlled toys you could buy at Radio Shack. The main difference is that they aren’t remote controlled, but instead they have a large wire connected to the back of them. A wire that is actually explained as a part of the story. But as the film goes along, the creatures get larger and more elaborate, including a couple that use many parts from a couple of the crew members themselves. When it gets to what’s referred to as the Goliath creature, not only is it huge, but it’s effect is achieved through a variety of effects. It’s not only a giant animatronic controlled through puppetry, but there are moments where it moves way too fast and fluidly for it to have been done on-set. And the transition between the practical robot and the CGI-enhanced creature effects are more or less seamless. Not only that, but the designs of all the creatures and robots besides some of the smaller ones really are something to behold. It’s very reminiscent of the Borg, only much less humanoid in places and very gruesome.

Seriously, just look at the design on this thing. Shame it’s not used in a better film.

The actions of the alien life form itself make very little sense overall, or half of the crew for that matter. During one of the few interactions, it’s shown looking up words in a computer dictionary to show them what it means, and yet it somehow picks up the metaphorical terminology of the chess terms check and checkmate. While it does have a brief moment that shows them playing chess long distance between someone on the boat and someone on the space station, there is no point where it shows them playing it via a computer. The Russian captain who has been hiding out on the ship for a week has thermite grenades, which the crew mentions could burn a hole through the hull. And yet, she never used them to do exactly that and burn a hole through the hull and sink it in the middle of the ocean. 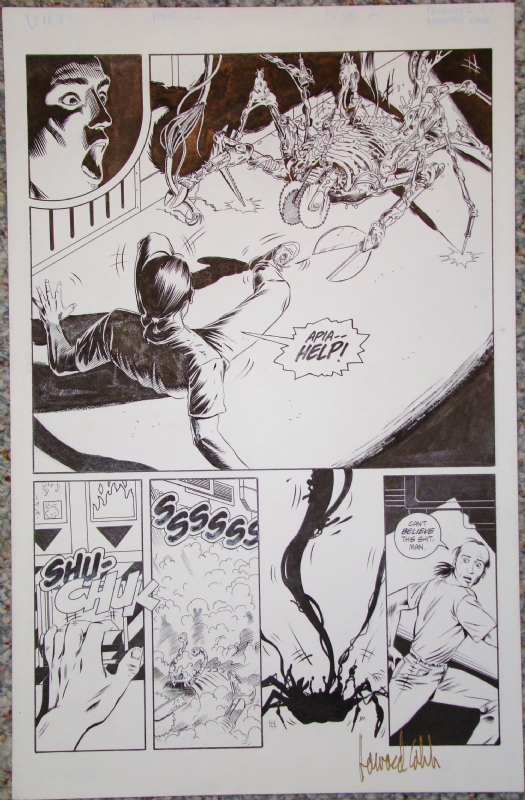 A page from the original comic.

Where the film does finally have a little bit of fun is when things get crazy in the third act. The black guy flips his lid and goes completely mental, he takes an arsenal of weapons with him, talks to himself, and just has a grand ol’ time. The film finally becomes a bit of a survival horror reminiscent of Aliens without any of the snappy dialogue which carries it through to the climax. There isn’t a whole lot to recommend in this film outside of a few character designs, the first half is a complete slog, but there is some fun to be had in the final act, along with some impressive moments of gore. But overall it’s just too ridiculous to be taken seriously, even the actors barely see fit to give it their best. Just skip this one. Until next time, this has been Bubbawheat for Flights, Tights, and Movie Nights.

Leave a Reply to The Telltale Mind Cancel reply