Often there aren’t very many differences between an extended cut of a film and the theatrical edition. Often it’s just a scene or two, or a couple extra shots before or after certain scenes. And once in a while there’s a film that has some drastic differences between the theatrical cut and the director’s or extended cut like with Superman II or Daredevil. This falls somewhere inbetween those two. There is enough of a difference that I felt like I should comment on it, but there’s not enough of a difference to write a completely new review for the whole film, so instead I decided to just do a little quickie review of the Extended edition of the Thomas Jane Punisher film from 2004. If you would like to read my full thoughts on the theatrical version of the film, read here. 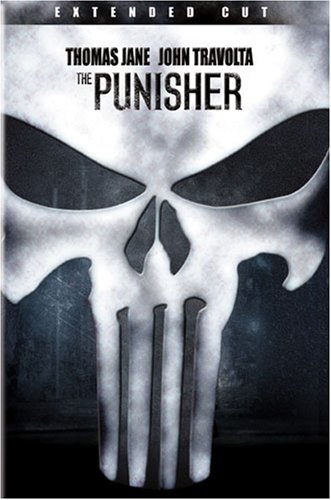 The main extent of the additional scenes from the Extended Cut give James Weeks a much more prominent place in the story. Weeks was the officer who ultimately gave up Frank Castle’s real name to Howard Saint. It starts out with an extended animated intro. The intro would have started off the film with some action and a morality play. The animation itself was rather simplistic, it’s all in black and white with simple motion along the lines of an animatic or a motion comic where the characters are shots of the actors given something along the lines of a posterize treatment in Photoshop. The main impact of this scene shows this morally ambiguous moment where Castle has these two terrorists captured and his commanding officer wants to kill them right then and there while Castle wants to arrest them, since killing them would be murder. Ultimately, one of them grabs a grenade and kills themselves and the officer, while Weeks grabs Castle and they both jump to relative safety. As it’s presented in this animated version it does slow down the pace of the opening which is the exact opposite of what it’s intended to do as in live action it would be a more intense action set piece to show off Castle’s skills early on. It may have worked in live action, but it’s better served as a deleted scene in animatic form.

The rest of the film spreads out additional scenes with Weeks, including one where Howard Saint finds out he has a gambling problem and visits the Cubans early on in the film. It’s a nice moment that helps give the Cubans a little more presence and personality, and it also adds some unnecessary nudity as Weeks has a couple casino babes on each arm wearing only pasties and a thong. There’s also a handful of scenes between Castle and Weeks as Castle starts to figure out what happened and realizes that Weeks was the weak link that led to his family’s death. It culminates in a visit to Weeks’ house which is practically empty due to his overwhelming gambling debts, he leaves an opening for Weeks to just let him go, but Weeks takes the bait and tries to shoot Castle with his own gun. Castle reveals that he’s holding all the bullets, loads the gun with a single bullet and convinces Weeks to shoot himself in the head. Overall, it feels out of place with the rest of the film, and while Weeks was partly responsible for Castle’s family’s death, the punishment doesn’t feel like it fits the crime and it makes Castle feel less righteous in his punishment. It was interesting, but ultimately I would stick with the theatrical cut.