Welcome to another edition of Follow Friday where I take a look at a great movie blogger that you should check out too. I prefer this over a blogroll because it gives each blog their own time to shine, plus I personally rarely click on blogrolls so why would I expect you to? Not only that, but I get the chance to check out some great blogs I might not have found otherwise found, talk to some great people, and share the conversation with you. So this week I was directed by filmsRruss to check out a blog dedicated to action movies, guns, and all things badass, which does include quite a bit of coarse language, and so does this post FYI. I’m talking about The Smoking Pen. 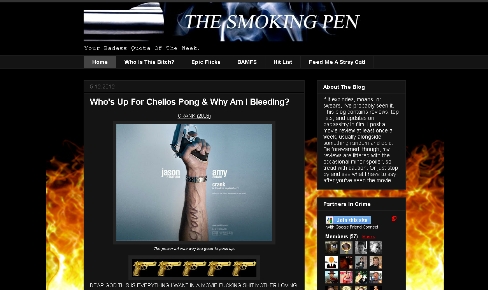 One of the first things I noticed on this blog was her BAMF of the week, otherwise known as Bad Ass Mother Fucker, and also is not every week. But it’s a long running feature that covers every type of badass, not just the muscle-y action-y ones, and not just the guys. She also has a great sense of humor that fits right along with the type of movies she reviews, there’s a lot of jokes, a lot of swearing, but also just a plain old love of action movies. If you’re looking for a good movie to get your blood pumping and the action rolling be sure to check this site out soon. And as always, I got a chance to talk with M. and ask her a few questions about her site.

Bubbawheat: Thanks for taking the time to talk with me. Took a look around your site and enjoyed what I saw.

M. Hufstader: Thanks yourself! This is an awesome gig you’ve got going here, I’m happy to be a part of it.

BW: I loved seeing Kevin Smith as one of your BAMFs of the week, is there any more unusual choices that you’ve taken some crap for choosing? Any that got you a surprisingly positive reaction?

M: Yes, Kevin Smith is 100% awesome. No denying it. So far, a BAMF Of The Week post consisting entirely of a small hamster holding a sniper rifle has the highest views of anything on my site. Go figure. People also seemed to enjoy my Easter BAMF, the Monty Python Killer Rabbit. Apparently, everyone loves a killer fluffy animal. I haven’t actually gotten any slack from my BAMFs yet, but that’s why they’re BAMFs. You can’t argue with muscle, guns, and badassitry.

M: That’s a hard one. I suppose it depends on how you define “action movie”. For example, Road To Perdition is one of my favorites and while there aren’t any CGI explosions in it, it falls in the general “gangsters and bad guys” genre. In other news, besides the classics like Star Wars and Lord Of The Rings, I can (and have) watch Weekend At Bernies a million times over without losing interest.

BW: What made you come up with the idea for the Fight Club rules?

M: I was baked and it seemed like a good idea at the time. Because, clearly, baked ideas are the best ones. Next question.

BW: Where did you develop your love for all things badass?

M: I would have to say it all started with the man who wrote the dictionary on badass, Bond, James Bond. While all the other little girls were pretending to be princesses, ballerinas, and Spice Girls, I was rolling around on the ground reenacting James Bond films. That’s part of where the name “M.” came from–my name does, in fact, begin with M., and I wanted to feel as badass as Judi Dench.

BW: If someone only read one of your reviews or articles, which one should it be?

M: Good question. I would have to pimp my review of Hanna. Not only did I have a hell of a lot of fun writing the review, but it’s also just an epic fucking movie. The epitome of a solid, good action film in my opinion.

BW: What do you think is the most badass superhero movie?

M: I see what you did there! Let’s see…does the aforementioned Hanna count? The last superhero movie I saw that I really enjoyed was Kick-Ass, even though they aren’t exactly your stereotypical superheroes. I will add that I have yet to see The Avengers, just because I’m waiting for the fuss to die down so I can actually get a ticket.

BW: It’s worth the wait. And what blog do you suggest I follow next week?

M: I’m going to have to nudge you in the direction of Brent’s site, Criminal Movies. I dare you to find anyone else quite so dedicated to cinema.

BW: If there’s anything else you’d like to add, feel free, I hope I said the word badass enough.

M: Nada! Just that this is a great way to connect different blogs, so more power to you to coming up with something like this! BAMF of the Week: Bubbawheat, what do you think? Oh, and I guess I should plug my other blog, which doesn’t quite use the word “badass” so much, Feed Me A Stray Cat!. Roll credits!

Thanks again, had a great time checking out your site. And since it is still blog awards season, if you’re a member of the LAMB already go right here and nominate The Smoking Pen (and Flights, Tights, and Movie Nights), and if you’re not a member of the LAMB and run a movie site, then go join! Until next time, this has been Bubbawheat for Flights, Tights, and Movie Nights.